Croatia’s second oldest theatre and the oldest theatre still being in use to these days, was built in 1870. Šibenik’s people are very proud of one particular theatre’s distinctiveness: the construction was not financed by the state or the city, but by a group of 28 prominent citizens. Once built, it was the largest and most beautiful theatre in South Europe. In 1896 the theatre got electric lighting as one of the first theatres in the world.

The theatre is located on the east entrance to the Šibenik’s Old Town; so once stepping out of the theatre, the event visitor gets drawn into the medieval stone streets full of historical buildings, eateries (konobas), coffee bars, prestigious restaurants, and shops with local specialties (from food and wine to jewelry). Šibenik’s open-market is also just a stone’s throw away. 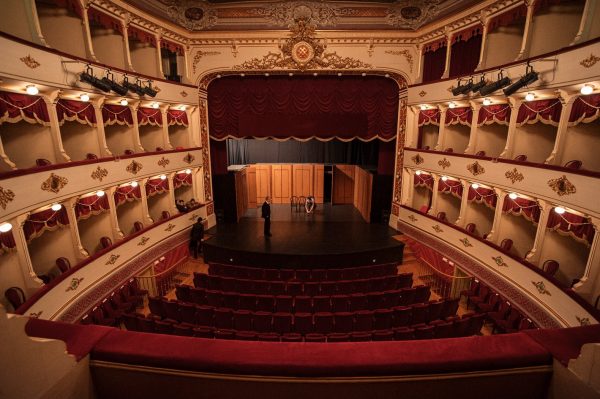 Another jewel that one can quickly rich from the theatre’s doorstep, is the Šibenik’s coast. The path to the Šibenik’s promenade leads through a beautiful Robert Visaini Park which wears a name of a world-known botanist from the 19th Century. Just a few stairs before reaching the coast from the park, a modern statue, dedicated to the 11th Century king of Croatia and Dalmatia Peter Krešimir IV the Great, greets the park’s visitor. Krešimir the Great, seating high on the chair and protectively over-viewing the town and the sea, is considered to be the founder of City of Šibenik. Therefore, Šibenik is sometimes called »the Krešimir’s City« (Krešimirov grad).